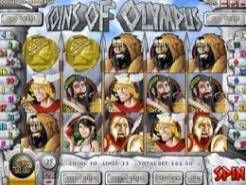 Play Now
Have you always been fascinated by those heroic and adventurous mythical tales about the famous Greek Gods, and do you always wonder where that mysterious and ancient city of Atlantis submerged into the ocean? Then this is your amazing chance to meet the famous gods and find the sunken treasures of Atlantis. The gods Hercules, Zeus, Hermes and the horse Pegasus are waiting for you in the Ancient Greek era, and a brave explorer awaits you in her modern, Atlantis tracking submarine. These slot game characters have something in common, because they are all in some way motivated by their desires for fame, richness and glory. Help them to achieve their goals, and you also have an opportunity to obtain these life enhancing honors.

The immortal gods bless you and reward you with many treasures in Coins of Olympus Slots . This supernatural 5 reel and 25 pay line slot title from Rival Gaming has a theme that draws its inspiration from the Greek mythology. It offers a perfect opportunity to dive into a world of mythical gods, celestial beings and other elements from the famous Greek stories. The Gods are living on the mountain Olympus, and they watch over Greece from their luxurious thrones high in the sky. They are powerful and they are also very rich. However, they are now in danger of losing a lot of their wealth, due to soil-splitting earthquake that shakes all their treasures from the mountain. In Coins of Olympus Slots, it is your task to join Hermes and the fabled flying horse Pegasus in their quest to retrieve these precious valuables. Zeus will follow your endeavors and he rewards you generously if you manage to bring back his valuable objects.

Lost Secret of Atlantis Slots from developer Rival Gaming takes you to a mysterious world that lies deep in the ocean. The place where you find all the ancient treasures lies just 5 reels deep, but you still have to find the exact spot. In order for you to succeed, you will join an explorer, who is on a quest to find the mystical sunken city of Atlantis and all of its mysterious treasures. Together, you step into a high-tech submarine that is equipped with oxygen tanks, a GPS system and 25 treasure tracking win lines. It is time for you to try your luck at the wonderful underwater world, where deep sea creatures and fabled treasures await your arrival.

Hercules the Immortal Slots from Genesis Gaming gives you the very alluring opportunity to become the immortal Greek God Hercules. He is a god who is mainly known for his strength and bravery. Hercules fights with mortals and with various mythical creatures, and he does this while he only wears his sandals and a cloth. Do you possess the strength to fight his legendary battles and defeat all the nasty foes that attack him? Make sure that you keep his honorable legacy alive, and you might be rewarded with godly rewards that make your bank account immortal. Hercules the Immortal Slots has 5 indestructible slot reels and 25 powerful pay lines.

Did you ever hear of a mysterious sunken empire full of ancient treasures, of an immortal god that fights for his honor and of a story about a special coin retrieving mission that is ordered by the Greek gods of Olympus? The best mythical slot games manage to trigger your imagination, draw you in, make you rich, and always make you want to play more. They are the gods of the online casinos, the providers of wealth and prosperity, and the suppliers of numerous mythical adventures that know no boundaries and no transience.
Play Now