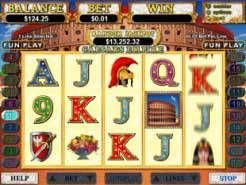 Play Now
The best ancient Roman themed slot titles are fully packed with beneficial cash prize opportunities. However, you need to fight various dangerous battles in order to obtain them. Bravery, strength, fearlessness and a lust for power are some of the characteristics that you need to possess, in order to leave the battlegrounds as the glorious winner. But with determination and a little bit of luck, you can definitely make sure that you become the most honorable warrior in the ancient Roman empire, and your efforts will of course not go unnoticed by the emperor and his entourage. The wealth of Rome is now within your reach, so strap on your armor, grab your weapons and start your action packed slot machine adventure with a powerful roar that puts fear in the hearts of your opponents.

During the glory days of the ancient Roman empire, true heroes went to war in pursuit of the strongest desired needs in that time period, which where glory, honor and wealth. Are you also in pursuit of those needs? Then you should leave your fears at home and channel your powerful strength and warrior skills in order to claim the treasures that are only rewarded to the most brave and honorable men. Keep your eyes open for Julius Caesar when you spin the 5 reels of Caesar's Empire Slots , because a visit to the ancient Roman Empire is not complete without a view of this legendary Roman emperor. Caesar's Empire Slots from developer Real Time Gaming (RTG) has 20 pay lines that give you a good chance to become a wealthy Roman.

Only step forward to spin the reels of the Gladiator Slots 3D game if you know that you are brave and skilled enough to fight a battle of life and death. Gladiator Slots from software developer Betsoft Gaming welcomes you to the legendary Roman Colosseum. This was the place where gladiators fought fierce battles to show the crowd their strength and honor. Now it is your turn to show your skills to impress the crowd and also the beautiful princess. You have the unique opportunity to become a legendary icon of ancient Rome. Spin the 5 slot machine reels and work the 30 pay lines like a true hero, and expect to be generously rewarded if you manage to win the fights from your competitors on the arena floor.

Gladiator Wars Slots takes you back to a time when gladiators where the super stars of the ancient Roman Empire. Their battles for life or death against brutal opponents, where always watched by thousands of bloodthirsty spectators. Do you think that you will be able to strive and stay alive in the gladiator arena? It is time to test your strength, your fearlessness and your honor in this 5 reel and 243 pay line slot title from Genesis Gaming. Spin the reels and show the crowd that you are able to entertain them and that you are brave and strong enough to fight and defeat any opponent. You have the opportunity to become a true hero, and the emperor might reward you with valuable gifts if you manage to become his favorite fighter. Glory awaits you, so win your fights and become a wealthy and famous ancient superstar.

Are you always on a quest for fame, glory and wealth? Then you should definitely go to any of the online casinos that have the best ancient Roman themed slot titles in their games list. These slot titles are perfect battle grounds for you to show your skills and to obtain large amounts of wealth and honor. Ancient Rome awaits you. Fight your battles, attract the attention of famous emperors, like Julius Caesar, and experience how it is like to be a popular hero in the glory days of the mighty Romans.
Play Now