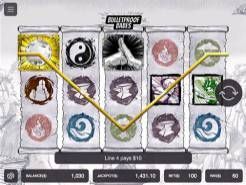 Play Now
Sometimes, you have to fight to get what you want. Luckily, if you are playing the best fighting themed slot titles, you are only a punch away from obtaining large sums of money. There are many battles that you can choose from, so clench your fists and grab you weapons, because you will have to punch some winning sense into those slot reels. Make sure that these reels capitulate and that they obey your wishes, because then you will soon hold some shiny golden coins in your bloody fists.

Experience a Clash of the Elements in Bulletproof Babes Slots

Play Bulletproof Babes Slots and experience how it looks like when present-day Manga meets age-old martial arts. It is time to awake your inner Japanese ninja and join the fight of the five combating princesses. Each of these fighting royal ladies represents an element from the earth. Be assured that you will see a lot of sparks when water, metal, earth, fire and wood collide with each other. Do you have what it takes to fight yourself to big winnings in this Genesis Gaming slot title? Then set out your 20 winning lines and push those 5 powerful reels into action.

Become a Boxing and Gambling Champion in Heavyweight Gold Slots

Beat your opponent to pulp and become the heavyweight boxing champion that takes home all the cash rewards. Make sure you train first though, because it is going to be a tough fight. But don't let that knowledge scare you, because you will not step out of that boxing ring with a small reward. In fact, you will be forever known as the glorious hero who used his fists and his gambling skills to become the richest heavyweight champion in history. Heavyweight Gold Slots is a creation from Rival Gaming. It has 5 reels and 20 pay lines.

Join an Epic and Potentially Lucrative Siege in Ares: Battle for Troy Slots

It is your turn to rewrite the history books, and to become very rich during the process. Ares: Battle for Troy Slots presents itself to you in various high quality casinos on the internet. This game gives you one important mission: You have to besiege the ancient city of Troy. Once you are in this glorious city, you have the great opportunity to claim all its treasures. So grab your battle gear, fight like a hero, put fear in the hearts of the citizens and place the coins in your pockets. However, be aware that the powerful god of war, Ares, will also join the fight in this epic story, and he is after the loot of the city as well. Don't fear this fierce opponent though. Spin the slot reels and let nothing stop you from becoming the richest champion of war in this truly epic 243 pay line slot title.

Are you ready to step into the ring, or to enter the battlefield? You better make sure you do, because winnings are only coming your way if you decide to swing those swords and pound those fists. And don't worry if you do not possess any fighting skills, because a push on the spin button is all you need to do to set a fight in motion, and to come out of it as the glorious winner.
Play Now