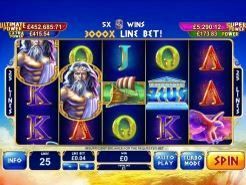 Play Now
The Age of the Gods series of slot games hailing from Playtech has proven to be a huge hit with players. We’ve lost count of how many games there are in this series (still not enough though, in our opinion!), but we are putting two of them together in a head-to-head here. Who will win – the Prince Of Olympus or the King of Olympus ?

This five-reel, 25-line game introduces Hercules as the wild icon. He can appear on any of the middle three reels. A separate Hercules logo appears as the scatter. This is one of two symbols Hercules himself won’t replace – the other being the scary Hydra symbol. Scary it might be, but if the Hydra appears on the first and fifth reels, you will witness a battle between the Hydra and Hercules. Try and take out four of the heads, winning cash prizes and a multiplier to try and boost the total win. There is also a chance the Hercules Rage feature could trigger, which will see all the heads destroyed. Add in some free spins and the Herculean Strength bonus in two forms, and this is a winner.

This works on the same reel set and payline format as the above game. This time, we focus on the king himself – Zeus. He also acts as the wild, as you might expect him to do. His temple is put to work as well, appearing as the scatter icon. A minimum of three scatters are required to trigger 10 free games. You will get an increasing multiplier in these. It begins at 2x and goes up by 1x every other game. The final two games therefore see a 6x multiplier in play. Every spin will see a wild Zeus icon frozen in place in the center of the third reel.

Our verdict: Which slot do we prefer?

How can we choose between these two games? On balance, we prefer the Prince of Olympus purely because it has more bonus features. There are free spins involved, just as there are in the King of Olympus slot, but the Prince of Olympus also boasts several varied bonuses. That puts it in pole position in our minds. Make no mistake though – both games are delightful to play, as are the others in the Age of the Gods series.
Play Now