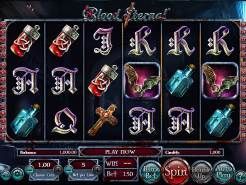 Play Now
Over the next two weeks, two casinos are hosting a Halloween Slots Tournament with $2,000 in cash prizes. From October 15th to the 28th, Juicy Stakes and Intertops casinos are hosting the Halloween Slots Tournament with $2,000 in prizes. For this tournament, three slot games were chosen. They are Blood Eternal , Dr. Jekyll & Mr. Hyde , and Frankenslot's Monster. Players have two weeks to collect points playing these three games. The player with the most points on the 28th wins $400.

About the Three Slot Games

Fans of vampires will love Blood Eternal slots. The game has six reels instead of the typical five. Each reel is packed with vampires and humans. If they're side by side, they combine to make a large wild that is frozen in place for the free games. There are also bats and double bats that raise the chances of getting a massive payout. Dr. Jekyll and Mr. Hyde slots tells the story of Jekyll and Hyde. Sometimes he's very good, but other times he's evil. When Mr. Hyde appears, you'll play the Frenzy Bonus and win cash by choosing the path of his rampage. You play until the police capture you. Multipliers and free spins are also possible. What is Dr. Frankenslot up to? Find out when you play Frankenslot's Monster. It's an electrifying game with a bonus where you can win 25 times your total bet. There's also a free spins bonus that can be retriggered an unlimited number of times. Those free spins come with up to three extra wilds on each spin.

Don't miss this special tournament. It's only available from October 15th to the 28th. If you're not already signed up, make sure you do at Intertops and Juicy Stakes. Both casinos offer welcome bonuses to get you started. Play the three Halloween slots and collect as many points as you can. Only the top players will get a share of the $2,000 so play often.
Play Now