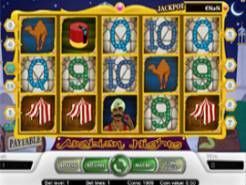 Play Now
Online slots jackpots have been growing bigger and bigger over the past several years. This has led to truly massive payouts that have made certain players rich beyond their wildest dreams. But who are the biggest online slots winners of all time? Find out as we cover the seven largest online jackpots in history.

British solider Jon Heywood never dreamed that he would become the biggest online slots winner ever in 2015, when he was betting just 25p a spin. But Lance Corporal Heywood was shocked when he hit the progressive jackpot on Mega Moolah , which was worth €17,879,645 (£13,213,838). "I couldn't believe that I'd won all this money at the time - and it still hasn't sunk in," said Heywood. "It's amazing. The first thing I will spend it on is the best possible medical treatment for my dad." Aside from getting medical treatment for his father, Heywood also replaced his old Fiat Punto car with a yellow Bentley Continental GT.

Two years prior to Heywood's big win, a Finnish man was playing Mega Fortune and set the previous online slots record with a €17,861,813 win. Unlike Heywood, who made the news rounds, posed for pictures, and popped champagne, this Finnish winner remained low-key after his life-changing win. The only known personal detail is that the man was 40 years old when he won in 2013.

In 2011, a Norwegian student returned back to his dorm room after seeing a movie with friends. He found a few free slots spins in his account that were a reward for his sports betting. The student began playing Mega Fortune and triggered the bonus round, then landed winning jackpot symbols on the bonus wheel to earn €11,736,375. Afterward, the 20-year-old was so overwhelmed that he didn't even know what to do with the money. "It was just impossible to sleep, and I am shaking and sweating," he said. "I haven't thought about what to do with the winnings. I need to try and calm down before even thinking of what I do with the money!"

An anonymous person was playing Arabian Nights in 2012 and hit an €8,635,872 payout. Unlike the jackpots discussed above, this payout was never a record because it happened after the Norwegian student's windfall. But it's doubtful that the €8.64 million winner cares after winning such a massive fortune.

Right around the same time that Heywood set the record in 2015, a Swedish player named Alexander won a €8,577,104 prize on Mega Fortune. Alexander's win was somewhat overshadowed by what Heywood did, but he was no less enthusiastic about hitting one of the largest slots payouts in history. "I was totally speechless and couldn't believe what was happening," said the 30-year-old. "It was late and my wife had already gone to bed, but I had to wake her up and celebrate. I'm going to lay low to begin with, but I'll make sure my mortgage is paid and treat myself to some exciting holidays. It will probably be difficult to avoid buying a new car!"

2015 was a huge year for online slots jackpots because, along with Alexander and John Heywood, this player also won big. The anonymous person was playing Hall of Gods slots when they hit a €7,820,888 payout. NetEnt is scarce with details on winners of their games, which again appears to be the case here.

Before the above-mentioned jackpot, the previous record on Hall of Gods was a €7,673,975 payout hit in 2012. The recipient was a Swedish player going by the initials L.G., who said that she wanted to pay off her family's debts and take them on a Thailand vacation. She also discussed using her winnings to get a new car.
Play Now